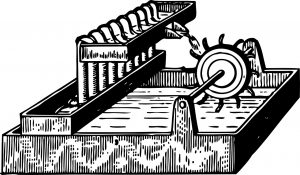 Some marketers believe it’s possible to generate demand for their products and services. The most deluded in this regard go so far as to call their marketing departments “demand gen teams.”

Those of us who sell in person and print… who read the sales and marketing classics… and who study human nature… know that creating demand is impossible.

Demand is energy, and physicists assure us energy can be neither created nor destroyed.

“All energy in a closed system must remain constant; it can neither increase nor decrease without interference from the outside.” – The first law of thermodynamics, also known as the law of conservation of energy.

Therefore, there is no such thing as demand generation. You can only tap into existing demand.

Which is why when someone tells me they’re “in demand gen” I ask why they’re not spending their time instead on perfecting a potentially more lucrative perpetual motion machine. (The likelihood of positive outcome for either activity is similarly non-existent.)

Both tapped into existing demand.

But how can demand exist for something not yet invented?

In the case of the iPhone, people were already using cell phones and Pocket PCs. Adding a phone to a pocket-sized Apple computer was an obvious next step.

An unknown demand already existed for a pet that required no feeding, walking, or veterinary care. Marketers merely channeled and directed that demand into selling 1.5 million pet rocks at $4 each.

A copywriting legend explained to us mere mortals this principle of unknown demand, in one of his many books. He also explained why demand – he called it desire – cannot be created.

That copywriting legend sold over $50,000,000,000 worth of inexpensive products for his clients, which is why I pay attention to his lessons.

Another problem for those who labor under the misapprehension they can create demand, is that they must first educate their markets.

Educating a market is extremely expensive… well beyond the budgets of most companies. The price of educating a market is a difficult reach even for governments, which have unlimited power to take anything and everything from others, to pay for said education.

Where did the misguided marketers who call themselves demand generators get the idea they can generate demand that didn’t exist until they came along?

Perhaps they made the mistake of listening to tenured professors with no sales experience, who are incapable of selling ice water to a thirsty man* in the desert. Don’t believe professors like this one.

Regardless of where the notion originates, I feel sorry for them being oblivious to the absurdity of their claim.

Whether you agree or disagree, please share your point of view in the comment section on LinkedIn. Thank you.

*I typed “thirsty man”, because few women are sufficiently reckless to place themselves alone in the desert; Pippa Bacca being the exception that makes the rule.