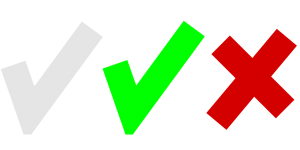 If you think you’re right about this, you’re wrong

Years ago the now late and lamented Copywriters’ Board contained threads and posts from copywriters of all levels of knowledge and experience.

As you may imagine, such online gatherings produced many passionate discussions about what worked and what didn’t.

One day a copywriter of renown posted a weight loss sales page and asked for a critique.

Some thought it okay, some thought it good, and a few took the time to let the original poster know that it was complete garbage.

The original poster led the dissenters on, until all had fully stated the letter was incapable of getting attention, let alone converting a prospect into buying.

After those who thought it rubbish had committed their opinions in writing for the entire Interweb to see, he told them who had written it, and how well it had done.

The author of the posted sales letter was a very famous direct response marketer who had been successfully plying his trade for decades. All good copywriters have heard of this person… indeed, I’d venture that he’s inspired more copywriters to enter the direct response field than any other.

And what of his weight loss letter, posted word for word on the forum and ridiculed by many?

It had set sales records, and was still being used, years after first being tested.

More proof that YOU NEVER KNOW what is going to work… until you TEST.

You also don’t know if something that didn’t work last month will work six or eight months from now.

Only last week I learned of some very savvy marketers who re-ran a campaign that had bombed when first run, months before. They chose to try again, just to ensure it was a dud. This time was the charm, as they did eight figures in sales of an inexpensive item.

The next time someone asks what you think of a sales letter or advertisement or any marketing piece intended to elicit response from its intended audience, DO NOT take their bait.

Instead, be honest: You do not know.

You will only know AFTER you’ve tested it.

Mediocre marketers judge marketing pieces according to their own opinions.

Good marketers don’t judge any piece by their opinions, because they know they are not the target market. Good marketers test. It’s the only way.

Please share your comments where this article appears on LinkedIn. Thank you.