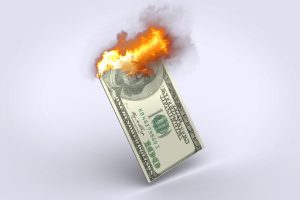 Burning money on trade shows (not exactly as shown)

The suggestions below are amalgamated from years of experience and many different events. Before I get to them…

Since you’ll want to consider the source, rest assured that I’ve worked all three sides of the trade show table.

As a technician for a data storage reseller I literally talked myself hoarse over 10-hour days in show booths.

As a tech journalist I’ve reported on conferences, as well as interviewed attendees, exhibitors, and speakers. Remember how some trade shows had daily newsletters, sometimes stuffed under your hotel room door at 5am? That used to be me. No, I didn’t deliver them – I wrote them.

In addition to selling booth space when an employer put on shows, I’ve also been a conference helper – telling people where to go and showing them where to get off.

So I know a little about conferences and events, although possibly not as much as you.

And I’m always amazed at the things I see exhibitors do at them. We’re in technology dammit – we’re supposed to be smarter than the rest. Yet we’re not. In that spirit, allow me to present my suggestions…

1. Wait until the last minute to design your booth.

Do not bring a laptop and large monitor with your company videos.

Throw a few magic markers in your supply box and make up handwritten signs when you get there. Tell yourself people like the personal touch, and that pro graphics will only make people think your prices are too high.

2. Hang out at the back of your booth.

Use your phone to check email, text and talk to others. Talk to your booth mate or your neighboring exhibitor. Making attendees wait gives the impression you won’t be happy to be interrupted, lets them know you’re in charge, and that you’re life is far more interesting and important than any questions they may have about your product and service.

3. Ignore people who approach your booth.

They hesitated, likely because they’re afraid of you giving them a big sales pitch. So don’t give them one.

When two of you are in the booth with one attendee in front of you, ignore any other attendee who walks up to you and obviously wants to talk. Focus on the conversation already going on. The new person might learn something.

Chances are the new arrival only wants a free pen or toy. She’d never want to buy something from you or interview you for free editorial publicity to her readers.

Not at the front of course… near the back… so attendees will feel uncomfortable about pestering you for information.

Chew noisily, with your mouth open. It’s enchanting to attendees, who’ll be delighted with your work ethic. They may even write to your boss about what a busy little beaver you were at the show… too dedicated to eat somewhere else.

They get enough business already. Let the person who doesn’t care about your company or products work the booth. S/he can mope about or hide at the back.

Enthusiasm – especially for your product and service – is infectious. You don’t want attendees to catch anything.

If you must put salespeople there, use the guy or gal just starting out… the one who can’t remember much about your products, or who isn’t very good at representing you.

Better yet, let working a trade show booth be a reward… for those who suck up to the boss… are the same religion as the boss… are related to the boss… or are friends with the boss. Doing so will maintain your company morale.

Let your signs do the selling for the first half hour each day. When your booth staff crawl in, coffee cups in hand, make sure they talk loudly about how hung over they are. Prospective customers prefer hearing about booth people’s self-induced problems.

Nothing says, “We don’t want your business” like an empty booth. Let people know that not only are you so successful that you don’t need new customers, but also you’ve got money to burn on a booth.

In this economy attendees will appreciate your candor.

Excessively attractive people are shallow and only bring attention to products advertised on television, online, and in print.

No matter how well dressed they are at a trade show – even when covered from the neck down – it’s a sleazy practice. Lots of people say so, and the majority is always right.

Women – the majority of IT buyers – will see right through your cheap tactic… even those who are attracted to women. So will the intelligent men, and you know how IT is full of them.

People are sheeple and they go where other people are. Booths with “booth babes” are always the most crowded with “Lookie Lous” – those who only look, and never buy. And that makes it difficult for real clients to approach your booth.

Besides… it’s deceptive. A typical fat old bald IT guy (like me) makes eye contact with an attractive… well dressed… impossibly slender young woman… only to have a suited salesman sidle up alongside – velociraptor style – and ask a qualifying question.

When the IT guy leaves, all he’s going to remember is that young woman’s smile. He won’t remember the t-shirt, bag, pen, flyer, or anything the salesman said. That model’s smile will not anchor your product to his memory, because his memory is already full of that model.

Don’t bother to check with show organizers to learn how many attendees and exhibitors have registered… don’t add the number of speakers… and then don’t add another 20 percent just in case.

You paid good money for those materials, and there’s no need to cover the convention center with them. If people want what you’re selling, they’ll find you on the Interweb. That’s what it’s for.

9. Be outrageously promiscuous with your freebies.

Give goodies away to anybody willing to let you scan their badge. Let them come back again and again. It’s a write-off – isn’t that what accountants call it?

By giving free goodies to everybody you’ll get lots of leads, and isn’t getting leads what a trade show is for?

It doesn’t matter that the leads only want your goodies and don’t care about your product and service. Sales wanted leads, and by golly you got them thousands of leads.

Of course they’ll complain about the leads being worthless, but salespeople are always complaining. Weeding out the freebie seekers is a salesperson’s job.Tell them if they don’t like it they can’t work the booth next show.

Everybody knows that contests are merely a way to gather leads and that’s why you paid for the little badge scanner.

The extra attention a contest brings to your booth will only overload your staff. They have enough to do, rewarding themselves with food and booze on your company budget.

Besides, the prize will cost you too much money. Your cost of customer acquisition is already too high when compared to the lifetime value of each of your customers.

You know those numbers, don’t you? What it costs you to acquire a customer? How much a customer buys from you over a lifetime?

Never mind – you’re in the majority, who have no idea what I’m talking about. Carry on clueless.

11. When the show is within two or three hours of closing, have your staff take the booth down.

Your accounting department was too damn cheap to book the next flight after the show. They saved a few dollars on airfare and paid the price of missing out on speaking with who knows how many prospects.

Those busy people who really wanted to speak to you are just going to have to wait until next year. Missing you will teach them a lesson about planning their show schedules better.

Never. Some say following up demonstrates professionalism. The truth is that it indicates how desperate you are for new business.

You don’t really need new customers… you only did the show to “put in an appearance.” Let the leads you’ve collected languish on a hard drive or in a box somewhere.

Please share your thoughts in the comments section on LinkedIn. Thank you.