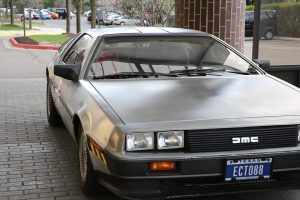 30 years ago some thought this was a cool car

Recently on my LinkedIn feed appeared an article about driverless vehicles, written by a Canadian senator.

The senator wrote: “To demonstrate the pressing need for action, last week senators swapped their parliamentary shuttle bus for a few laps around Parliament Hill in a driverless, steering-wheel-free bus. Rolling at a reduced speed of 10 km/h (the model can currently reach 30 km/h), the shiny red vehicle rang its very real bell at curious journalists as they jumped around and in front of it to test the machine’s reflexes.”

Reads/sounds like the senators and their fart catchers enjoyed themselves, and now feel sufficiently educated to tell us how far behind the rest of the world Canada will fall if it doesn’t embrace and prepare for driverless technology.

I’m uncertain why this article raised my ire. Perhaps it’s the breathless manner imploring us to form committees, pay for studies, and hire more bureaucrats to monitor this “next revolution in transportation.”

Perhaps I’m merely displaying childish jealousy, because I didn’t get to play with the “shiny red vehicle” and ring “its very real bell.”

The Fail is strong in that senator’s article, beginning with the image of a 30-year-old, overweight, under-powered car that bankrupted its manufacturer. Were no royalty-free images of the bus available?

To use the article example, many able-bodied humans can get out of the way of a vehicle traveling at 10Kph during a demonstration. So what?

Increase that to hiway speed and show me how well the driverless vehicle avoids people – and vehicles. (Probably no better than the typical Canadian driver.)

Back in college a classmate who’d been to avionics school told us how airport authorities asked the makers of aircraft instrument navigation systems to deliberately program error into the controlling software.

Their request was because aircraft flying across the Pacific Ocean on auto-pilot were repeatedly landing on the same spot, prematurely wearing out that tiny portion of the runway. I learned that story 25 years ago.

More recently the Jean Claude van Damme Volvo commercial proved the technology can be adapted successfully to wheeled vehicles. Even tho there were drivers sitting in those trucks, the trucks were doing the driving.

Yet this senator is all excited about a toy bus doing 10Km/h.

Now I’m told robotic technology company executives are advising lawmakers. Either the senator isn’t listening to those advisors or hasn’t met with them, because he doesn’t understand the issues about which he wrote. I mentioned only a few; more remain.

Stuffing a bunch of overpaid, underworked political reward receivers into a driverless bus and limiting its speed below that of a human-powered tricycle is a cute toy that might impress those cloistered in Ottawa.

It does not however, portend imminent “revolution in transportation”.

Nor does it impress me. Perhaps it will, someday.

[PLEASE NOTE : Senators are NOT elected in Canada. They’re appointed by the Governor General on the advice of the Prime Minister.

Qualifications are secondary to the amount of service the senator has performed for his or her political party. How 105 unelected party faithful comprise a “chamber of sober second thought” on legislation already passed by the elected House of Commons is a matter of consternation for many Canadians.]